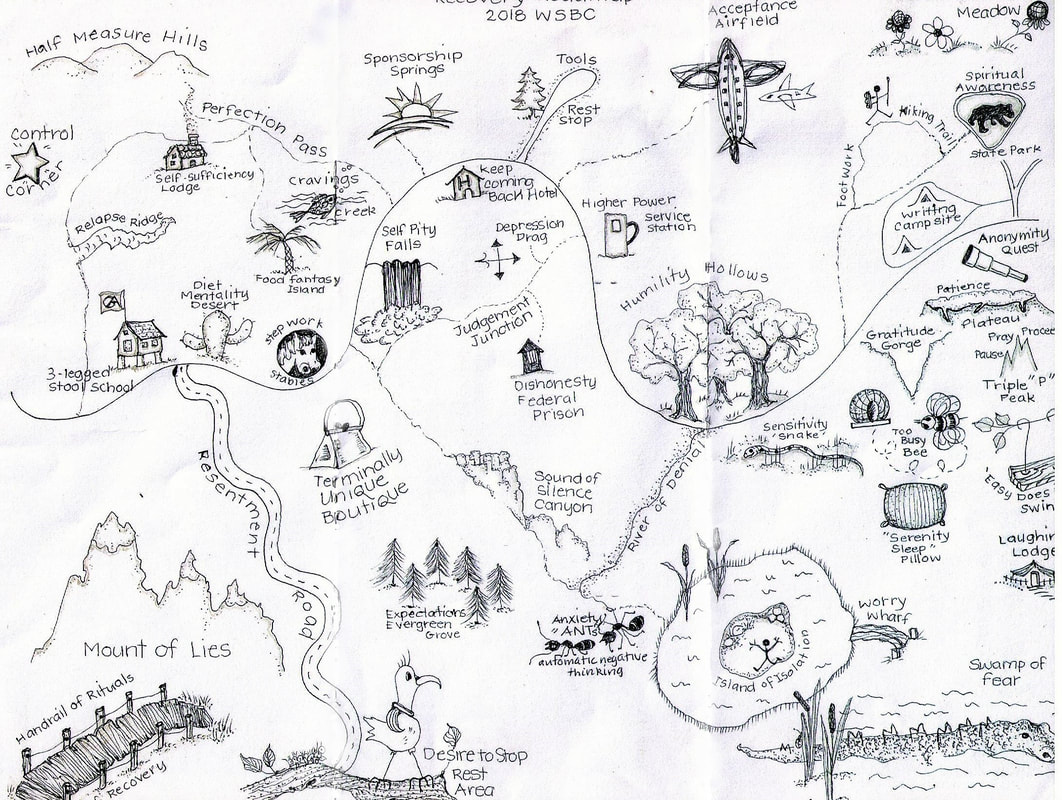 OUR INVITATION TO YOU

We of Overeaters Anonymous have made a discovery. At the very first meeting we attended, we learned that we were in the clutches of a dangerous illness, and that willpower, emotional health, and self-confidence, which some of us had once possessed, were no defense against it.
We have learned that the reasons for the illness are unimportant. What deserves the attention of the still-suffering compulsive overeater is this: There is a proven, workable method by which we can arrest our illness.

The OA recovery program is patterned after that of Alcoholics Anonymous. As our personal stories attest, the Twelve Step program of recovery works as well for compulsive overeaters as it does for alcoholics.

Can we guarantee you this recovery? The answer is up to you. If you will honestly face the truth about yourself and the illness; if you will keep coming back to meetings to talk and listen to other recovering compulsive overeaters; if you will read our literature and that of Alcoholics Anonymous with an open mind; and, most important, if you are willing to rely on a power greater than yourself for direction in your life and to take the Twelve Steps to the best of your ability, we believe you can indeed join the ranks of those who recover.

To remedy the emotional, physical, and spiritual illness of compulsive eating, we offer several suggestions, but keep in mind that the basis of the program is spiritual, as evidenced by the Twelve Steps.

We are not a “diet” club. We do not endorse any particular plan of eating. In OA, abstinence is the action of refraining from compulsive eating and compulsive food behaviors while working towards or maintaining a healthy body weight. Once we become abstinent, the preoccupation with food diminishes and in many cases leaves us entirely. We then find that, to deal with our inner turmoil, we have to have a new way of thinking, of acting on life rather than reacting to it—in essence, a new way of living.

From this vantage point, we begin the Twelve Step program of recovery, moving beyond the food and the emotional havoc to a fuller living experience. As a result of practicing the Steps, the symptoms of compulsive eating and compulsive food behaviors are removed on a daily basis, achieved through the process of surrendering to something greater than ourselves; the more total our surrender, the more fully realized our freedom from food obsession.

Here are the 12 Steps as adapted for Overeaters Anonymous:
“But I’m too weak. I’ll never make it!” Don’t worry; we have all thought and said the same thing. The amazing secret to the success of this program is just that: weakness. It is weakness, not strength, that binds us to each other and to a higher power and somehow gives us an ability to do what we cannot do alone.

If you decide you are one of us, we welcome you with open arms. Whatever your circumstances, we offer you the gift of acceptance. You are not alone any more. Welcome to Overeaters Anonymous. Welcome home!

Permission to use the Twelve Steps of Alcoholics Anonymous for adaptation granted by AA World Services, Inc.
http://www.oa.org/pdfs/suggested_meeting_format.pdf  (revised August 2014)